In the year 2014, the I. N. C. members have chosen Romanian Bucharest for their meeting. On the invitation of our notary colleague, Ms. Dr. Florentina Marinescu, we have met as usually at the end of November. Our meeting consisted of the same persons as usually, only our colleague Mr. Dr. Stanislav Filipov apologized.  We also enjoyed companionship of a young notary Radu - Costin Berevoianu, the partner of Ms. Dr. Marinescu.

Our colleague prepared the program of our meeting so that we could not only see the places of interest of Bucharest, but also to have enough space for both professional discussions and friendly chat. Visiting several restaurants with local cuisine consummation and pálinka tasting, as well as visiting the Palace of Parliament (also known as the People´s Palace or Palace of  Ceauşescu), left a deep impression in all of us.

There are about 2 300 notaries in Romania, having twenty million inhabitants, from that in Bucharest are practising their profession about 500. They are performing their activities on a territorial competency. For business reasons, many notaries are associated into larger offices, some of them having also five or more notaries. Beside that there exist a lot of offices in which works only one notary with one or two qualified employees. Our Romanian colleague with her partner invited us to their notarial office where they are exercising their activities with three high-graduated employees.

How our colleague explains the territorial competence?
I may execute any notarial act, if it takes place in my office, i.e. if for example the seller and the purchaser come to my office in Bucharest. Outside my notarial office, I may exercise my function only within the municipality of Bucharest. Of my own will I cannot go to another town or region to issue a notarial deed there. Exception is only inheritance proceedings exercised only by the notary in the last domicile of the deceased, and that no matter where the estate is located. No other notary may exercise such proceedings. Of course there exist exceptions in case the deceased was not a Romania citizen, or his last domicile was not in Romania.

We were also invited to the seat of the Romanian Chamber of Notaries, where we had the possibility to visit its conference premises, archives of deeds, as well as computer facilities. Into the archives are given all deeds and documents when a notary terminates his activity in the event that a notary has died or retired, and his archives could not be taken over by his partner. Such cases are extremely rare, because the office of a notary who wants to retire is monitored by those notaries who do not have an office in Bucharest. In such a manner a notary chooses his successor who will take over his office and his archives. In case a notary has a partner, the archives continue to remain in the notarial office of such partner. The notarial archives of deeds may also use the active notaries, who may archive for some fee there deeds and documents from their own office.

The Romania notaries have a monopoly on drafting contracts on transfer of real estate. They do not know the legal institute “solemnisation” (Austria, Germany), therefore they must draft each deed themselves. In addition, they assume responsibility for the payment of the real estate transfer tax, as well as for calculating the base of such tax. For this purpose they are equipped with catalogues for setting the price of the real estate (price maps). Interesting is also that a Romanian notary has electronic access into the database of the tax office (revenue authority) in order not to allow the transfer of immovable property of a participant (party) being in default with financial obligations to the state.

Relatively strictly is done the notarial vidimus, the confirmation of authenticity and correctness of copies of documents. Each vidimus clause has an assigned number (similarly as legalization of signatures in our country), and one copy of the document being certified is being archived with the notary. A lump sum of EUR 2 is being charged for one page of the document being attested.

While for legalization (authentication of signatures on documents) is being charged fee depending on the value of such act, not a lump sum. Many signatures are not being authenticated at all, as is usual in our country (e. g. purchase contracts, lease agreements), because the practice prefers them to be made in form of a notarial deed, and therefore the fee is being charged according to the value of the subject matter of such act (e. g. lease agreement with rent EUR 1,000 monthly, i.e. EUR 12,000 annually, in rate 0.25%, i.e. a fee of CZK 30 for legalization of one signature on the lease agreement. The rate 0.25% is the lowest fee that a notary may charge in accordance with the law). Indeed a notary is allowed to certify a lease agreement for a lump-sum fee of EUR 10, however in practise such authentication is not requested from clients. The reason is that authentic instruments, the notarial deeds, are directly enforceable, and therefore clients want the notarial form, and not only legalization of signatures.

New is the divorce through the consent of spouses by a notarial procedure, as well as property settlement of the spouses.

The Romanian law of inheritance does not know the institute of judicial commissioner. The succession procedure in Romania may be opened only on request. Its opening is not an official duty as in our country. The request to open the succession procedure may be done by any of the successors, creditors, or any other person justifying a legitimate interest (analogy to an application in accordance with the Austrian or German legislation). In the first phase, all the possible heirs are registered within the succession procedure. However, if they do not accept the rights of inheritance within one year, then the notary expels them from the succession procedure. The successor is entitled to choose a notary himself, however only a notary practicing his profession at the last domicile of the deceased. This notary will prepare all documents, and secure the entries into the land registry. The legal or testamentary certificate (Erbschein – certificate of inheritance) issues the notary to the successors. It is a document that proves the transfer of ownerships rights to the estate. The inheritance proceedings are certainly not the main activity of the Romanian notaries. At the time of our visit, our colleague informed us that she dealt with 28 inheritance proceedings during the year 2014.

In conclusion, I would like to express surprise how the regulation of the profession of the Romanian notaries is being inspired, as well as in Bulgaria, by the German principles for notaries. Of course about that we have no idea in the Czech Republic. My impression was certainly also intensified by the fact that at the time of our stay in Romania, this country experienced a “surprise” of the election of an ethnic German, Mr. Klaus Iohannis, as the president of Romania.

Many thanks for the nice days in Bucharest belong to the notary Ms. Dr. Marinescu and her colleague Dr. Berevoianu. My personal thanks include also the colleague Dr. Pros, the Czech consul, for information facilitating my orientation in the local environment. 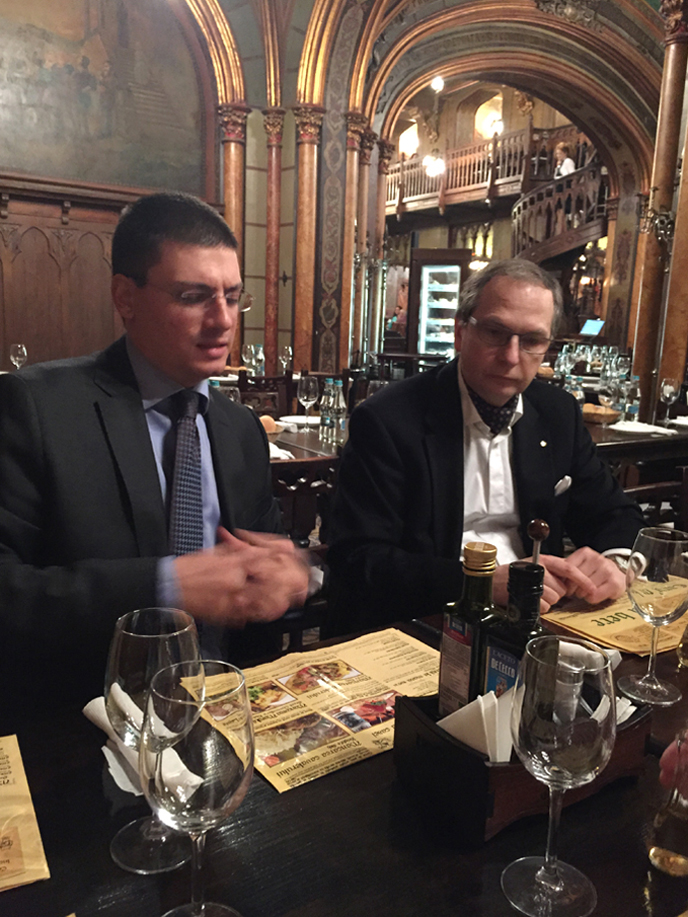 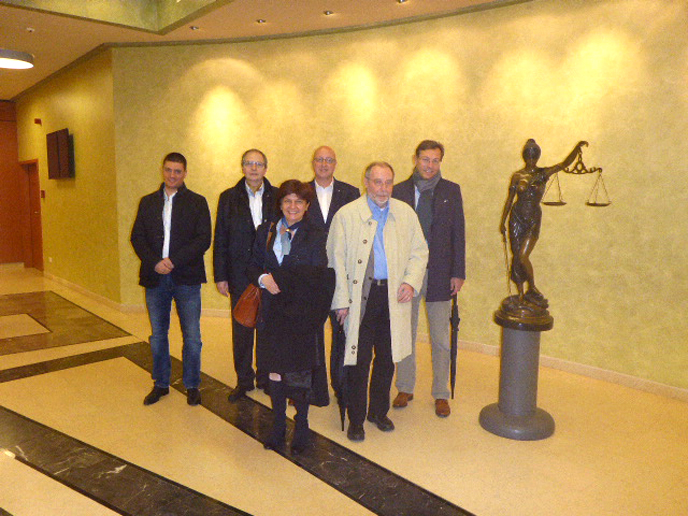 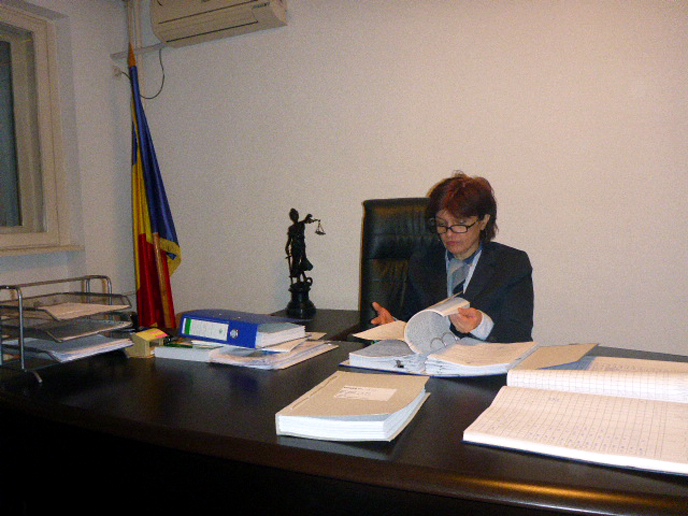 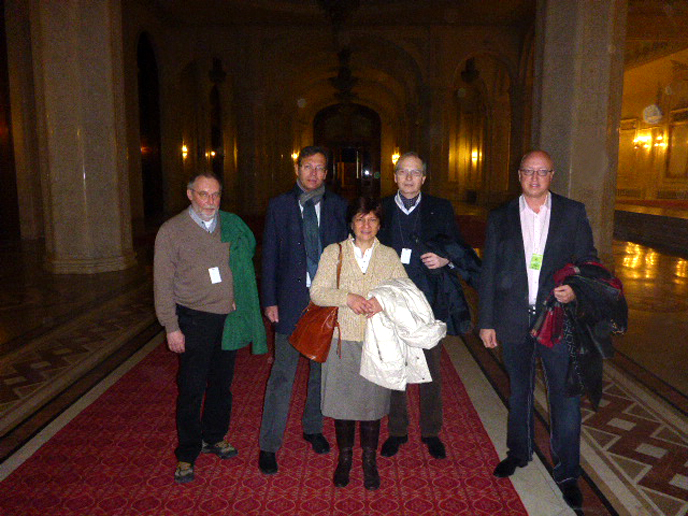